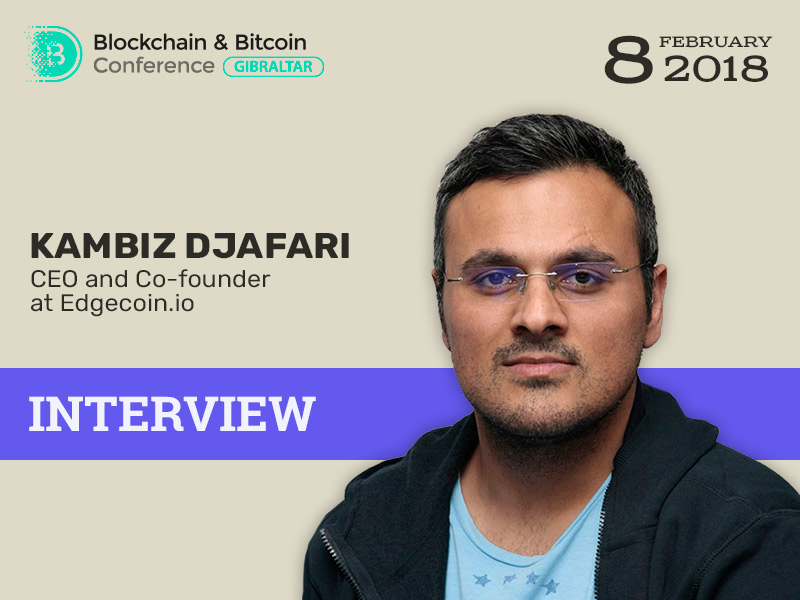 In 2018, bitcoin’s price might reach $50 000 but nowadays growth by 2000% at current price is impossible, according to CEO and Co-founder at Edgecoin.io Kambiz Djafari. Before Blockchain & Bitcoin Conference Gibraltar, its organizers interviewed the future speaker concerning blockchain development and regulation in 2018, token sales and the forthcoming conference.

BCG: Why is Bitcoin price growing? Are there any fundamental principles?

K.D: Demand and supply. It really is as simple as this. Bitcoin has a groundbreaking technology in the blockchain. Since 2009, a lot has changed and technically more advanced products have hit the market, but Bitcoin is still the golden standard in Crypto Currencies and will keep this position for the foreseeable future.

BCG: Which token sales in your opinion were the most impressive in 2017?

K.D: There were many big token sales in the last year. Some of them, like ICON or TenX performed very well, but in my eyes, KIN was the most notable due to the fact that the KIK messenger was already an established product. We will see many more big token sales of famous brands such as Telegram and Kodak now.

K.D: The growth rate? See question 1, supply and demand. The adoption rate? Regulations. The more countries and governments regulate payments in Bitcoin, Litecoin and others, the more likely are we going to see an adoption worldwide.

BCG: How do you think, what is the maximum rate that Bitcoin can reach in 2018?

BCG: Should cryptocurrencies be regulated at the international level? Will bitcoin survive under the pressure of state regulation?

K.D: International regulations would be amazing as this would set a standard for a world currency, but this will never happen in my opinion. Bitcoin will survive any regulations, although the price may fluctuate heavily in the process.

BCG: Which method is an optimal one for regulating cryptocurrency on your opinion?

K.D: Installing the same regulations as we already have in FIAT currencies such as USD and EUR. Then again, Bitcoin is only the peak of the iceberg and most other coins such as Ethereum are more of a platform, which will make it harder and different to regulate.

BCG: Bitcoin has no intrinsic value. What will keep it from the fate of the Dutch Tulip mania of the XVII century?

K.D: Gold, paper money and diamonds have no intrinsic values either. We give all of those their value as we are giving them a certain worth. The Dutch Tulip mania comes to mind to every doubter, it happened before around the millennial with the infamous DotCom bubble. It is certainly possible that cryptos will pop as well, but just like in the early 2000s, when some companies, such as Microsoft, Apple, IBM and Google survived, some coins will survive a bubble pop and surge afterwards even stronger. Besides Bitcoin, Ethereum seems like a currency that could survive and bubble pop while others in the Top 50 have a chance as well.

BCG: Which issues will you cover at Blockchain & Bitcoin Conf Gibraltar?

K.D: I will speak about the era of digital transformation powered by tokenization. Through tokenization it is possible to transfer real life asset or things of value into a fully digitalized economy. Furthermore, I will discuss infrastructures that has to be established in order to facilitate this enormous shift of value. Infrastructures will be built in a way that we call Blockchain as a service (BaaS). With Edgecoin for example we are aiming to disrupt education by using the blockchain for academic records and therefore make them completely decentralized. In general, blockchain has the ability to change the world for good and I will present a lot of examples on how this will change our daily lives in the near future. So, in near future we will see not only education on Blockchain but also logistics, transportation, real-estate and many more industries built with or on the Blockchain.

At the conference, you will be able to meet and talk to the speaker as well as ask him all the questions you are interested in. Register to Blockchain & Bitcoin Conference Gibraltar here.